This Bill: ‘Paid for by Union Wages’ 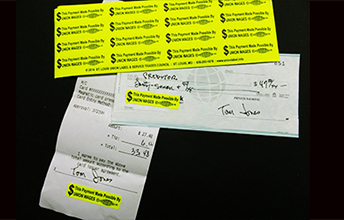 The St. Louis Union Label and Service Trades Council is printing stickers that union members can attach to cash, checks or credit card receipts, letting business owners know that the purchase was paid for by union wages.

The stickers are one response to the efforts of state Republicans to pass so-called right-to-work legislation, introducing a bill to that effect earlier this year.

Right-to-work laws have been shown to drive down wages by an average of $1,500 a year for all workers—union and nonunion alike. This wage cut hurts not only workers—it hurts communities and local businesses dependent on consumer spending.

As St. Louis Local 1’s blog recently pointed out, not only does Missouri boast higher wages and a better quality of life than neighboring right-to-work Tennessee, it’s also a better place to do business:

This entry was posted in Featured Posts. Bookmark the permalink.